Cerebral palsy is a lifelong disorder, affecting movement and posture.

Cerebral palsy describes a group of conditions affecting a developing infant or child’s brain. It is the most common physical disability in childhood.


The condition results from damage to the brain that occurs during pregnancy, at birth, or within the first two years after birth.


Depending on the extent and location of the brain damage, movement and posture is often affected, though these features are often accompanied by other difficulties.

The main signs for cerebral palsy are delayed development and difficulties with movement and coordination.

There can be indications at birth that may suggest your child has cerebral palsy, however generally signs become more apparent as your baby develops. Difficulties with movement and coordination are also often noticed by family. 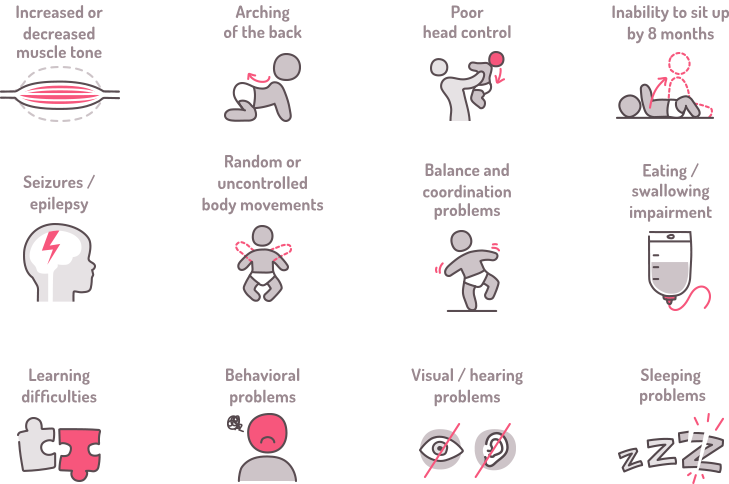 Other signs that your child might have cerebral palsy include:

These signs do not necessarily mean your child has cerebral palsy. But if you have concerns, please speak to a doctor and read more about how you can access our services.

Cerebral palsy is caused by either a bleed in the brain (haemorrhage) or lack of oxygen to the brain (anoxia).

Damage to the brain can occur at any point from early in the pregnancy, to months after a child is born. Often multiple factors combine together and create the specific circumstances that lead to a child developing cerebral palsy.

It is not an inherited condition (although it may be influenced by genetics) and cannot be screened for in pregnancy.

As we learn more about cerebral palsy, we realise it is probably more accurate to talk about risk factors than causes of cerebral palsy.

A combination of the above factors can further increase the risk of cerebral palsy.

If you or your child fall into one or more of these categories above it does not mean that they have cerebral palsy. However, if you have concerns, please speak to your doctor or read more about how you can access our services. 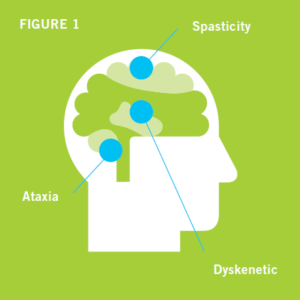 There are many different classification systems used with children living with cerebral palsy. Some are used to understand the part of the brain that’s damaged and therefore how cerebral palsy may affect a child. This is important in planning therapy that may be helpful.

Others systems are around functional ability levels in certain areas, for example, moving or eating and drinking. These help people to understand a child’s skill levels in those areas.

You will find several of these may be used to help describe your child and their abilities. This is done to help everyone involved with your child to understand your child more fully, decide what treatments are likely to be effective and what help they may need.

Below are some of the commonly used classification systems.

With this type of cerebral palsy, a child has shaky, less coordinated movements. It affects balance, fine motor control and a child’s automatic movement and adjustments to posture. This is caused by damage to the cerebellum near the base of the brain.

A mixed presentation may occur if more than one area of a child’s brain is damaged. Then a child may show a combination of the above motor difficulties.

Finding out that your child has or might have cerebral palsy can be overwhelming. Often families are not sure where or who to turn to to get support.

How We Can Help

We provide therapy for children with CP and other disabilities. Our therapists and teachers will work closely with you to understand and support the individual needs of your child and family. If you live in Johor, you can access our services ​whether your child has a diagnosis or not.
CONTACT US

How will CP affect my child's quality of life?
A life of joy and fulfilment means being surrounded by supportive family and friends, being engaged in life-enhancing interests and activities, and being safe and secure. A quality life includes economic security, personal safety, health and mental well-being, and freedom with independence. For individuals with cerebral palsy, quality of life is defined in the same manner. Studies confirm that children with cerebral palsy often report a quality of life on par with that reported by children without disability.
Is there a cure for CP?

There is no cure for cerebral palsy; the damage to the brain is permanent. However, the brain can adapt, and therapy can influence how the brain develops, to make the best possible use of the nervous system remaining. Everyone’s brain has some possibility for adaptation and learning but we know that younger brains are the most adaptable.

Is CP a progressive condition?

The damage to the brain is not progressive, but your child’s difficulties may change as they grow and mature. Limited movement can result in the shortening of muscles and deformities of joints and bones. Growth can also impact movement. This means for some children certain activities such as walking or using their hands, may become more difficult.

Does having CP lead to other conditions?

As cerebral palsy involves damage to the brain, it can affect many areas of function. For some children, problems may occur either as part of cerebral palsy or secondary to the condition.

This will depend on the extent and location of damage in the brain. For example, immobility can lead to muscle degeneration. Muscle stiffness can also impact on a child’s breathing and respiratory system. Some children have epilepsy and others difficulty with sleep, eating and drinking or communication and others with their sensory system.

Pain is the issue that most affects the quality of life in children who have cerebral palsy. However, please remember that these difficulties do not affect every child.

Is CP life limiting?
Cerebral palsy is not life-limiting as the initial damage to the brain doesn’t change. However, some of the associated problems that some children have or can develop, such as severe epilepsy, severe feeding issues or severe skeletal deformities can lead to a shortened life expectancy. This is only in a minority of children.
How can therapy help my child?
Therapy is focused on helping your child participate fully in life despite difficulties with their body’s functional abilities. This may involve addressing difficulties with the body’s structures, such as tight or weak muscles but will also include teaching different ways of doing activities or changing the environment and/or providing specialist equipment that makes a task easier. Specialist therapy can help you and your child manage the challenges that cerebral palsy may present.

Together we can make an impact.

A donation today to make their tomorrow.